Save The Dam Mill Pond

From This Green & Pleasant Land, p. 303:  “The Millbrook and Cavan Historical Society was born on Nov. 24, 1978….The immediate burning cause was the preservation of the old mill from which the Village takes its name; there was a move afoot to tear the building down….”

In February 2018, Needler’s Mill officially became the property of the Millbrook and Cavan Historical Society as representatives from Otonabee Conservation and the Historical Society signed the final paperwork at a public gathering at the Royal Canadian Legion Branch 402 in Millbrook.

Hundreds of people, both from our community and beyond, donated funds to save Needler’s Mill from demolition. At the gathering, we expressed our appreciation to all our supporters, acknowledged the significant gift we received from the Barron Cowan Foundation, and recognized those who undertook the work.

The community became involved in the fall of 2015 after Otonabee Conservation declared mills surplus to their needs and the municipality placed an Unsafe Building Order on Needler’s Mill.  The historic mill was slated for demolition or, at best, disassembly, storage and eventual relocation.

Millbrook was settled around the original mill on the site, built by John and James Deyell in the early 1820s.  Mills were the economic engine that drove the development of the area, with as many as 30 mills throughout what is now Cavan Monaghan Township producing everything from flour, oatmeal and livestock feed to lumber, cane and wool.

Deyell’s Mill burned down in 1857, and was replaced with an impressive three-storey structure by the new owner of the site, Walker Needler, who also owned a large mill upstream, built in 1830 by Adam Scott.  When the thriving Needler’s Mill in Millbrook was destroyed by fire in 1908, a portion of that Adam Scott mill was brought from Cedar Valley to Millbrook.  The grist (flour) mill operated right up until the early 1960s.  A sawmill was added in 1922 and operated until 1957.

The mill was sold to Otonabee Conservation in 1967 and within a few years, the mill buildings, which had been leased to a series of businesses, became vacant.  By the late 1970s, it looked like the buildings would be torn down.  This spurred the formation of the Millbrook and Cavan Historical Society in November 1978.  A successful fundraising campaign enabled the Mill Committee of the day to make the needed repairs and restore both the grist mill and the sawmill.

However, once again the mill fell into a state of disrepair and the foundation deteriorated badly, prompting the Unsafe Building Order in the spring of 2015.  Negotiating the sale of the heritage building with Otonabee Conservation, the Historical Society agreed to remove the sawmill and machine shed, and to consider the flour mill as a “monument”, with no public access to the interior.  Moving the mill onto a new foundation was also required.

Working closely with both the township’s Chief Building Inspector and with the CAO of Otonabee Conservation, the Historical Society was successful in fulfilling all the requirements set out by both.  Volunteers with the DamMillPond Group sourced contractors, obtained quotes for work required, and took a lead role in fundraising.  David Hobson and Alex Bushell were on site on almost a daily basis as volunteer project managers.

Next to the mill, the dam is being replaced with a larger, more secure structure.  Once the work on the Millbrook Dam has been completed, Otonabee Conservation and the Historical Society will work together to design and erect interpretive panels next to the mill, outlining the history and describing the cultural and recreational features in the area.

A passive information kiosk is now an added attraction to the greenspace next to Baxter Creek in Millbrook, between Needler’s Mill and the Millbrook Dam. A collaborative effort of the Millbrook & Cavan Historical Society and Otonabee Conservation, the four panels offer a brief, illustrated history of Needler’s Mill and highlight the importance of mills to the early settlement and development of this area by immigrants from the British Isles. The millpond and the importance of water power is also featured.  The panels include historic photographs from both our own Historical Society Collection and the Balsillie Collection at the Peterborough Museum and Archives.  Kirk Hillsley contributed images of wildlife observed around the millpond.  The kiosk was constructed by volunteers who maintain and operate the Hope Mill, using lumber sawn and dressed at the mill.
In the photo (l-r) Joe Paterson and Don Duncan from Friends of the Hope Mill; Celia Hunter and Kim McLeod, Millbrook & Cavan Historical Society; Councillor Ryan Huntley; and Dan Marinigh, CAO/Secretary-Treasurer of Otonabee Conservation. 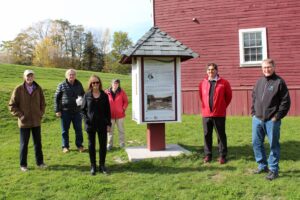 Your ticket for: Needlers Mill