Save The Dam Mill Pond

The earliest European settlers were from the north of Ireland, with others from Britain and southern Ireland.  The abundance of water played a major role in the early development of the area with mills supplying flour and feed, lumber and a great variety of other materials that spurred industry and productivity throughout the township.   Pioneer farmers cleared land, harvested trees, grew crops and raised livestock that fueled those mills and the local economy.  Schools, churches, rural general stores and post offices drew communities together; the hamlets of Cavan, Ida, Mount Pleasant, Springville, Fraserville, South Monaghan (once Centreville) and Bailieboro bear witness to this.  Other place names such as Dranoel and Cairo are now just in the historical record – which we keep.

In 1856, the first train arrived in Millbrook, a vital link, running from Port Hope then to Lindsay and on to Beaverton, with a branch line to Peterborough.  Millbrook Junction became a hub of activity, with grain storage houses and later, grain elevators springing up, along with a hog yard.  At one time, Millbrook could boast of having five hotels, and business thrived.  Many fine homes and farmhouses were built in the township during this surge of prosperity, giving Millbrook today the distinction of having 45 properties designated as being of historical significance.  However, as more rail lines linked major centres, the route through Millbrook became less important.  The opening up of the Canadian west drew a full half of Millbrook’s population to Manitoba in the late 19th century.  The Depression in the 1930s also took its toll.  The last train pulled into Millbrook Junction in 1951.

Today, family farms continue to have a significant influence on the rural landscape.  Between farm fields, newer homes dot rural routes, as transportation corridors to major employment centres attract new people to the area.  Just two decommissioned mills remain standing, as a testament to the early years of industry, and now there are new entrepreneurs and light industry to fuel the economy.  Change is constant.  The Historical Society strives to record the changes, so that where we’ve been can be acknowledged and appreciated as we move on.

To find out more:  the Millbrook & Historical Society has a number of publications available. 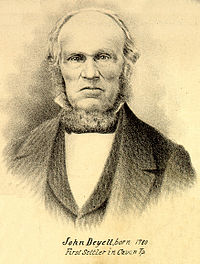 John Deyell is generally acknowledged to be Cavan Township’s first settler, arriving in 1816.  He and his family were certainly among the first to put down roots.  He had a long and remarkable life, and he left his mark.

Born in Drum, County Monaghan in Ireland in 1775, John Deyell’s first experience of Canada was in 1812 when he fought under General Brock against the Americans at Queenston Heights.  He was back in Europe to serve under the Duke of Wellington at the Battle of Waterloo in 1815, but soon after was en route to Canada again, this time with his wife Margaret Lancashire and son William.  He settled his family on Lot 23, Concession 3 on County Road 28, at the southern edge of what is now South Monaghan hamlet; the house is still there and in good condition.

Exhibiting extraordinary energy and considerable vision, John Deyell assisted in the first survey of the area and is credited with naming Cavan and Monaghan Townships in honour of his birthplace.  Since his land is situated on the west side of County Road 28, it is thought that a clerical error was made somewhere in the registration process and the names switched as he likely wanted to name the township he had settled in after his home county in Ireland.  However, the names stuck.

John Deyell established the first lodging house between Port Hope and Peterborough on his property in Centreville (now South Monaghan).  Over the door of his inn was the motto “Live and Let Live”.

He donated an acre of his land for the first schoolhouse in the township, and later moved the school west along what is now Zion Line so that Centreville Presbyterian Church could be built.  The adjacent cemetery was established where the school playground had been.

An industrious farmer, John Deyell is said to have carried his own grain all the way to Port Hope on foot to be milled.  Recognizing the need for a mill close by and seeing an ideal location on Baxter Creek, in the early 1820s, he built the township’s first grist mill, where Needler’s Mill stands today.

His energy and enterprising spirit comes through in a family tale.  For his five sons to prosper, he determined that he should settle four of them in neighbouring townships (and one in Millbrook), and with this in mind he was negotiating a deal for the purchase of land near Fowler’s Corners.  He was aware that one of his neighbours was also interested in this land and, as he looked down the road one morning, he spotted that neighbour heading north.  Suspecting that he had little time to close the deal, John Deyell set off on foot and arrived in time to secure the land.  It is said a Deyell lives there to this day.

John Deyell lived to be 103 years old, and according to his great granddaughter, Mary Sloane Eakins, because his disposition was so in tune with the broad-minded motto that hung for so long above his door, he was known as “Old Live and Let Live Deyell”.

Your ticket for: Our History