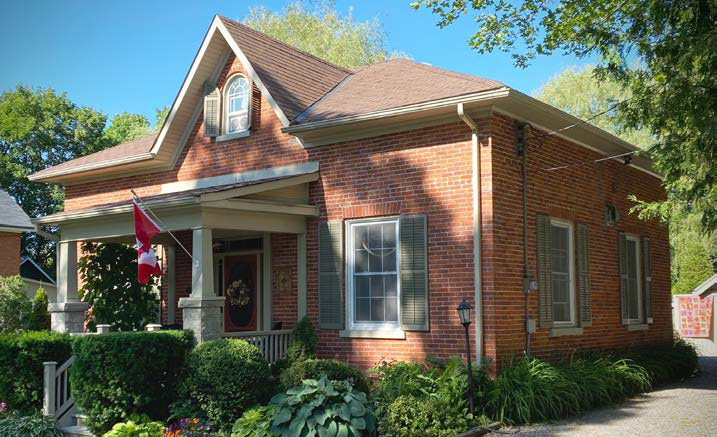 The land for this solid brick one-and-three-quarter-storey Regency
Cottage was a Crown grant to James Hunter registered in February
1825. In 1863, William Grier purchased this property from Robert
Medd.
This is, in many ways, a typical Regency Cottage with its square
symmetry, centre hall plan and the characteristic cottage style roof.
The Regency taste favoured congruency, and the large windows
reflected a sensitivity to pastoral surroundings. Typically, a verandah
would add to the picturesque design.
The style was well established in the province as early as the 1830s,
as evidenced in 3 Bank Street North, but retained its popularity
throughout the mid 19th century. The small front gable with its
rounded sectional window and solid brick construction suggest this
house was built in the 1850s or 1860s.
Next to the Ontario Cottage is the Clarry House, 8 Gravel Road. This
spacious property was sold in 1876 to Richard Guy, a watchmaker
and jeweler. The house is said to have been designed to reflect
elements of the home Mrs. Guy served in as a governess in England.
In 1892 the property was purchased by Harriet Clarry and remained
in the Clarry family until 1989. Of note are the Neo-Classical
entrance with fan transom and sidelights and the Italianate
brackets decorating the eaves of the low hip roof. The verandah is
not original to the design.

Your ticket for: The William Grier House