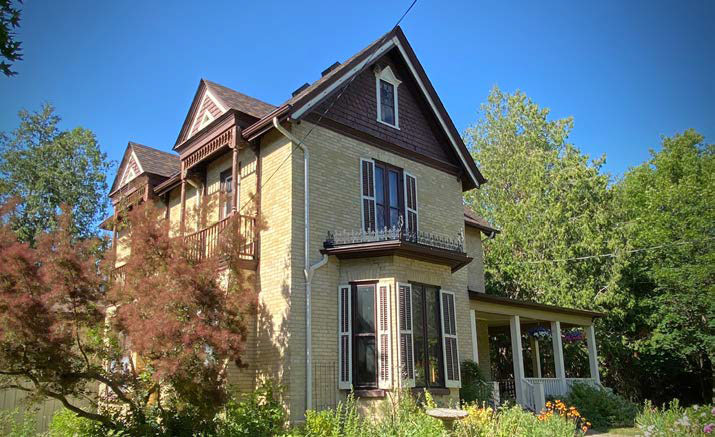 This beautiful 1885 yellow brick home displays the characteristics
of Queen Anne Revival, as demonstrated by the decorative
shingled gables. The angularity of some features suggests the
influence of the Stick style, a variation of Queen Anne, with its
strong vertical emphasis, long slender windows and sharply
pitched roofs. A large traditional bay window on the front façade
is decorated by wrought iron, and the west face features two
smaller bay windows with balconies.
Originally part of a Crown grant to Thomas Hutchinson in 1824,
the first owners of the house are believed to have been the
Smiths, a family of merchants. Records indicate that they sold the
property to Frederick Pendrie, a partner in Fowler and Pendrie’s
Dry Goods Store, located in part of the Second Empire commercial
block downtown.
The Pendrie family is also documented as owning 49 King
Street East, known as the Pendrie House. This Gothic Revival
buff-coloured brick home, built around 1880, is notable for the
distinctive pedimental surround above the windows, small drops
under the eaves at each corner, and decorative treillage above the
posts supporting the two verandas. The main entrance has a Neo-
Classical fan transom and rectangular sidelights.

Register for Event: The Smith House

Your ticket for: The Smith House