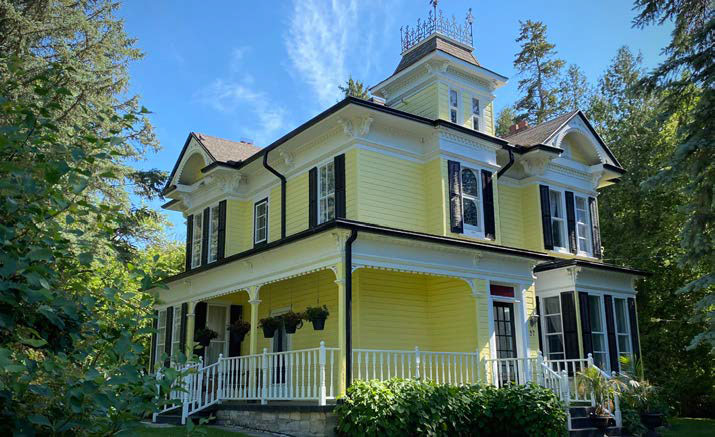 Robert Deyell, one of five sons of John Deyell (the first settler in the
township) built this beautiful two-storey brick veneer and frame
house in 1870. The property extends from King Street to Dufferin
Street, and once included a tennis court and summerhouse.
This house is a mature version of the Italian villa style described in
Andrew Jackson Downing’s pattern books. With clapboard siding, it
features a Tuscan tower with wrought iron cresting, a hipped roof
with deeply overhanging eaves supported by decorative brackets,
and a side verandah.
Thie house was used as a funeral parlour for the first time in 1945
when then owner George T. MacPherson purchased the furniture
store and undertaking business in downtown Millbrook. He sold the
property to John Wallace Haw in 1954. The J. Wallace Haw Funeral
Home was purchased by Comstock’s of Peterborough in 1965, and
continued operating until 1972, when the house became a private
residence once more, with spells as a cooking school and fine
dining establishment, and as a B&B.

Your ticket for: The Robert Deyell House