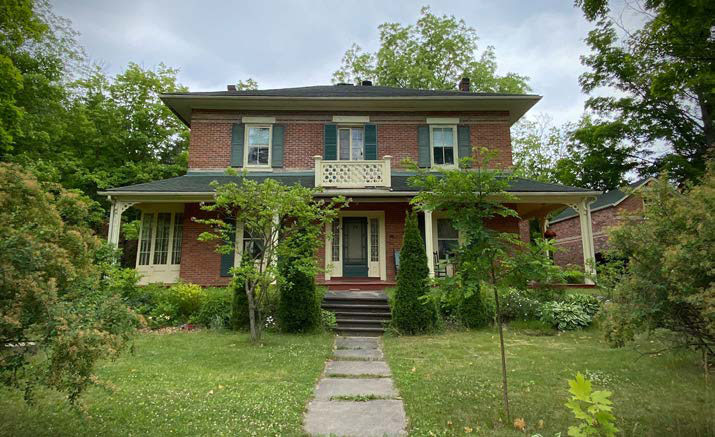 Matthew Hunter is credited with building, circa 1840, the one-storey
cottage that now makes up part of the first floor. The second storey
and additions to the main floor were undertaken in 1858 when
James M. Brodie bought the property from William Sowden who had
purchased the land from James Deyell in 1852.
This house can be described as Regency style in a Georgian frame.
The importance of the relationship with nature that characterizes
a Regency house is evident in the long windows, the full-length
verandah with balcony, and the low profile of the roof.
Dr. Henry A. Turner bought this house in 1893. His father, also called
Dr. Henry Turner, practiced medicine in Millbrook and Cavan from
1853 to 1900. The younger Dr. Turner set up practice in 1898 and
served the area until 1937. He had the brick garage constructed to
house his automobile, the first in the village. He is also credited with
glassing in the east verandah to create the village’s first solarium.
He opened a private hospital in 1915 over his office and drug store
downtown at 34 King Street East and established a very efficient
telephone system to better serve his patients.

Your ticket for: The Matthew Hunter House