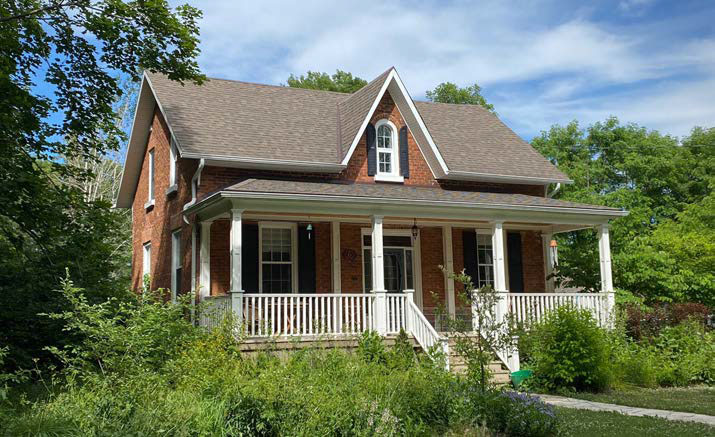 This Victorian Farmhouse-style home was built in 1865 for dentist
John Abraham Nattrass. The Victorian elements include the large,
open verandah with railings and decorative columns, and the semicircular
window and shutters in the front gable.
John Abraham Nattrass moved to Missouri in 1867-68 and became
a dental surgeon, but the Nattress family name (same family,
different spelling) is legend in Millbrook, with three generations
serving Millbrook and the area as barbers for over a century.
Following the lead of an uncle, Harold Nattress opened his shop in
1901 and barbered for 61 years before handing on his clippers to
son Lyle, who continued the tradition. Lyle barbered in downtown
Millbrook for 63 years.
Across the street, 7 Prince Street is known as the Wilgar House, the
only example of a homestead-style house in the village. Accented
by a large bay window and front verandah with decorative
brackets, the house occupies land sold to Margaret Wilgar in 1877.
A brick beneath one of the windows bears the initials WW and the
date 1886, perhaps the completion date of this house. The name
Clarence Wilgar is etched into one of the windowpanes.

Register for Event: The John A. Nattrass House

Your ticket for: The John A. Nattrass House