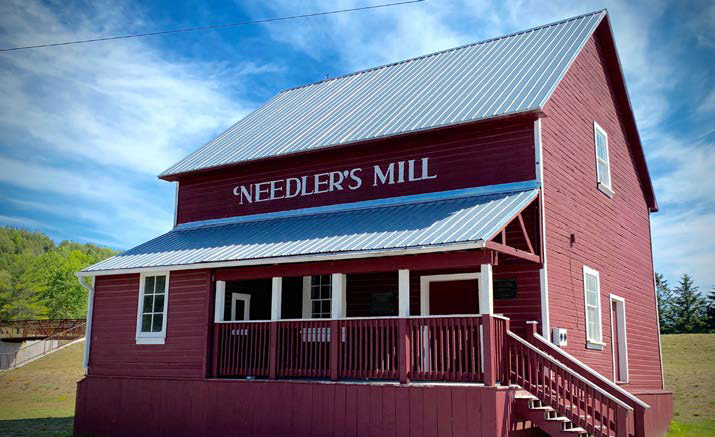 The first mill in the township was built here in 1820, financed by
John Deyell on land owned by James Deyell. This flour and grist mill
flourished, and Millbrook grew up around it. Destroyed by fire in
1857, the property was sold to George Needler who constructed an
impressive 3-storey mill on the site.
This mill burned in 1911 and was replaced by a portion of the
Cedar Valley Mill, also owned by the Needlers and originally built
by Adam Scott in 1830, brought from a location several kilometres
downstream.
This is the mill that stands here today. It operated as a flour mill
until the early 1970s, with an adjacent sawmill, built in 1922,
providing lumber for construction until 1959.
Needler’s Mill was purchased by the Otonabee Region Conservation
Authority in 1967 and declared surplus to its needs in 2015. With
community support, the Historical Society bought the derelict
mill and undertook extensive restoration and repairs. As part of
the purchase agreement, the mill had to be lifted onto a new
foundation, raising the original loading dock to porch height. The
penstock, through which water flowed to power the turbine, as well
as the sawmill and machine shed, also had to be removed.

Your ticket for: Needler’s Mill