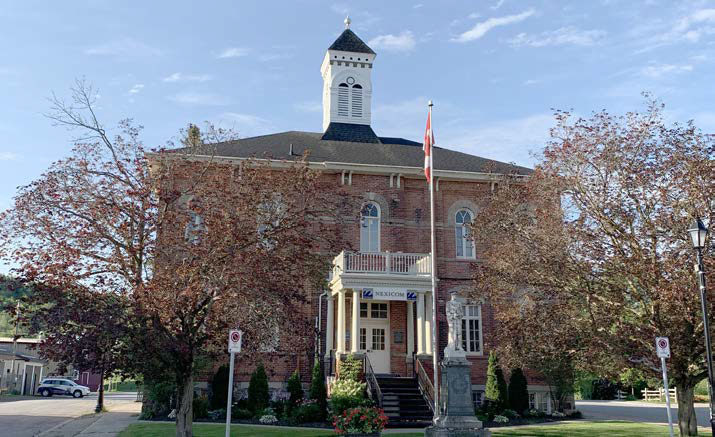 The first town hall was built on this site in 1844-45, a frame building
costing $500. In October 1873, Cornelius John Soule was approved
as architect for a new town hall building, which was completed in
1875. Soule also designed the Second Empire block on the south side
of downtown King Street.
This imposing red brick structure, with its characteristic bell tower,
first functioned as the council offices of both Millbrook and Cavan
Township, and also served as the local courthouse. A six cell jail in
the basement infrequently held prisoners awaiting trial. Into the
1950s, the tower bell announced the work hours by ringing at 7
a.m., 12 p.m., 1 p.m. and 6 p.m. The auditorium upstairs played a
vital role in community affairs, hosting high school commencement
exercises, dances and film nights, stage productions put on by both
local talent and professional touring companies like Chautauqua,
concerts and political rallies.
Of note architecturally are the two-storey pilasters on all four
facades, the paired eave brackets, the portico on the north façade
with balcony above, and decorative brickwork.
In 2005, the building was sold to local telecommunications firm
Nexicom.

Your ticket for: Former Town Hall